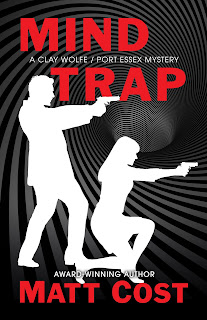 From award winning author Matt Cost comes a thriller that Bruce Robert Coffin says is "a twisted and chilling tale of control and manipulation. The ultimate 'what if' on steroids. What is the End Game?

It was as close to ecstasy as the woman had ever been in her life. It was enlightenment. She was no longer Martha Abbott. She was a warrior of Marduk engaged in a war of purity. "You say your daughter is missing?" Clay Wolfe asked. The man in front of him was slightly disheveled. Red eyes. Fear creased his features.

What is going to happen on Leap Day? "We have allowed sin to fill our homes, and it is our divine labor to cleanse that filth from our streets." Marduk's voice boomed through the cavernous temple.

Something evil is lurking in the streets of Port Essex. A missing girl. Violent attacks. It is up to Private Investigator Clay Wolfe, his partner Baylee Baker, and a colorful assortment of friends to get to the bottom of these odious occurrences before it is too late. Mind Trap is a thrilling ride set in a small Maine town with rich characters and shocking plot twists that will keep the reader rapt within the pages.

“You say your daughter is missing?” Clay Wolfe asked. The man in front of him was slightly disheveled. Red eyes. Fear creased his features.

“Yes. I haven’t been able to get in touch with her for weeks. Came looking for her this weekend, and she’s disappeared.” His voice was desperate and frustrated, but it was also angry.

“Your daughter lives with your ex-wife?”

“What’s that got to do with anything?”

Clay leaned back in his chair and waited. He hadn’t ever made a fool of himself by not saying anything. Instead of speaking, he took stock of the man in front of him. He had a 1970s shiny comb-over with full sideburns that made him look like an Elvis caricature. His face was long and broad, his nostrils flared slightly, and there was a bit of a quirk to his mouth.

Clay nodded. He was not the man’s priest. His own personal life certainly had enough holes in it. “Fair to say your wife was pretty angry with you?”

“She told me to f*** off when I left. Said she never wanted to see me again, and she hoped I died by castration and bled out.”

“And then you moved to Florida?”

“Yeah. Sick of these Maine winters, you know?”

“Could have moved south with your wife.”

“So, that was the last time you spoke with your wife?”

“I tried calling her, you know, to talk about Jenna, school stuff, things like that, but she wouldn’t answer my calls. Wouldn’t return my calls.”

“Jenna is your daughter?”

“Yeah, she had her own cell phone. She was pretty pissed at me, too, but I think I was making some headway with her. Told her maybe she could come visit me in Florida. She liked that idea.”

“When was the last time you spoke with your daughter?”

“Couple of months ago.”

Doug said this so quietly that Clay leaned forward. It seemed a long time to go without talking to your daughter, however estranged, Clay thought, but what did he know? At thirty-five years of age, he had no kids, and had been an orphan himself. What’s more, there were no women lining up to be the mother of his future children. He’d gotten the most recent contender for that title arrested and sent to federal prison for ten years. That seemed to be a deal breaker.

“How old is your daughter?”

“She is almost fifteen.”

“Did she give any hint that something was amiss?” Clay asked.

“She told me back in November that Martha had put the house up for sale.”

Clay nodded. “Did she say where they planned to move to?” He had to ask, even if he already knew the answer. Obviously, if Jenna had told her father where they were moving, there would be no need for Clay Wolfe.

“What do you think?”

“Wasn’t your name on the mortgage?” Clay steepled his fingers in front of him on the desk.

“It was her house. Her parents left it to her when they died ten years ago.”

“Weren’t you married to Martha then?”

“Yes, but they never liked me very much. Thought Martha could have done better.”

The conversation went on for another hour, with Clay slowly pulling pieces of the puzzle out of Doug Abbott. How Martha Abbott had been left a house when her parents died within two months of each other in random accidents. The Will named Martha as the beneficiary of the house, explicitly excluding Doug from ownership.

Martha had gotten the house free and clear of debt but had lost her parents, a loss that she never recovered from. She’d suffered from depression, ate anti-depressants like candy, saw therapists more than friends, and slowly closed down, with one exception. She poured all of her love into Jenna, smothering the girl with maternal affection and blocking Doug out of both of their lives as effectively as if he’d never existed. 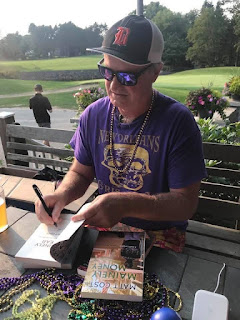 Matt Cost was a history major at Trinity College. He owned a mystery bookstore, a video store, and a gym, before serving a ten-year sentence as a junior high school teacher. In 2014 he was released and began writing. And that’s what he does. He writes histories and mysteries. "Love in a Time of Hate" is the third historical by Cost. "Joshua Chamberlain and the Civil War; At Every Hazard", was published in 2015, in which Emmett Collins grows into manhood during the Civil War. "I am Cuba; Fidel Castro and the Cuban Revolution" was published in 2020. It was recently awarded the silver award for historical fiction from Kops-Fetherling. Cost has also published the Mainely Mystery series including "Mainely Power" (the MHC Read ME fiction book of the year), "Mainely Fear", and "Mainely Money". The fourth book in the series, "Mainely Angst", will be published in January of 2022. He has begun the Clay Wolfe/Port Essex Trap series with "Wolfe Trap". "Mind Trap was the second in the series, and will be followed by "Mouse Trap" in April and "Cosmic Trap" in September. Cost now lives in Brunswick, Maine, with his wife, Harper. There are four grown children: Brittany, Pearson, Miranda, and Ryan. A chocolate Lab and a basset hound round out the mix. He now spends his days at the computer, writing.