Grant's Crossing - Death on the Alder by Jamie Tremain 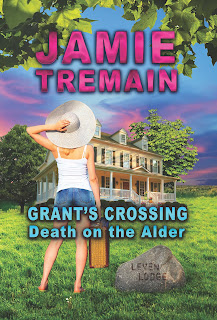 Twenty-eight year old Alysha Grant has inherited a large, rural, family property – Leven Lodge. A converted farmhouse is now home to a small, but eccentric, group of retirees. She feels overwhelmed and totally unprepared for this responsibility, but dives in.

Her arrival coincides with a body found floating in the Alder River. The suspicious death brings attention to some of the home’s residents and may be connected to a proposed casino. Opinion is divided on whether the development, to be built on a former sawmill location once belonging to Alysha’s family, will be a good thing for Grant’s Crossing.

Alysha and her life partner, Jeff Iverson, settle into their new duties, learning about the home’s residents and what makes them tick, when another body is retrieved from the river.

Coincidence? Alysha and new friends, voice their suspicions regarding the town’s shady naturopath—Dr. Reid Harrison—and vow to keep him away from those who live at the lodge. Despite their best intentions, Alysha finds her own life threatened, when true motives around the casino are revealed.

I stopped dead in my tracks. Fire and brimstone would have been preferable to the antagonistic greeting. I’d been taught to respect my elders, but seriously! He may have been old, sure, but he did have a commanding presence. His hands gripping the railing were large and looked strong. The buttons on his shirt strained over his barrel chest. His whiskered face was flushed beneath a full head of white hair.

Before I could respond, he spat out, “You show up now? Where were you when Dalton was being buried? Too busy to pay respects. But now, when there’s an inheritance you can find the time, eh? I know your type and I’ve no time for you.”

My jaw dropped. I couldn’t work up a retort to so much hatred. It was true, I’d missed Uncle Dalton’s funeral, much to my regret now. By now, my cheeks were burning as I realized others had overheard this little speech. Great way to be introduced.

I took a step back to survey the assembled group and decided to kill ‘em with kindness. I plastered a large smile on my face and with hands on hips said, “And good afternoon to you too, Mr. McTaggart. It’s good to see you again.” And then for the benefit of those who didn’t know me. “I’m Alysha Grant. I believe you were expecting me.”

Much scraping of chairs and greetings ensued when the residents came forward to meet me. All except Jock McTaggart. He’d turned on his heel and disappeared into the house.

“Don’t you worry about him, dear. He’s just upset about Dalton. They were quite close. Do you remember me? I’m Bea, a friend of your grandmother.”

I smiled politely. “I do remember you.” What a contrast to her husband! Petite, like me, and a textbook grandmother type. Sensible dress and shoes, even a pearl necklace. Her veined hands took both of mine and her voice was nothing but kind.

“Yes, of course. Let me introduce you to everyone and then I’ll take you to meet our cook and the housekeeper, who can show you around. Lovely women. Oh, listen to me prattling on. I’m just so glad you’re here.”

Then it hit me. The body discovered—McTaggart. I wondered about a connection, but I had to focus on Mrs. McTaggart. She’d started introductions. Crap, I’d never been good with names, especially not in a bunch like this. I must have met them at my grandmother’s funeral but hadn’t paid much attention.

“Alysha dear, this is Philip McGee,” she said and I shook hands with a dead ringer for one of my old university professors. Cardigan with patched elbows and all. Bet he’d never been married either. His expressionless face made me think he’d not an ounce of humour in him.

Next, she pulled me towards two ladies who seriously needed makeup lessons. Yikes, why did they all insist on wearing such bright red lipstick? But they were smiling at me as Bea identified them.

“Alysha, this is Rose Edwards, and Lily Courtemanche. Believe it or not, they’re twins–sisters you know.” They might be twins, but I had the impression one might be a little more lively, she had a warm handshake. I think that was Rose, but Lily focused on sizing me up. Kind of creepy.

From creepy to over the top. I had to take a step backward when the next resident bounded toward me. Perhaps older than he tried to portray, but he was trim, neatly dressed and his eyes twinkled.

“Hello, pet, I’m Ty Rogers. Awfully pleased to meet you. You’ll be a breath of fresh air around here, I’m sure.” I detected a slight British accent. He hadn’t waited to be introduced, and his handshake was a little on the weak side, but I thought he might be good fun. Probably gave some of the old ones a heart attack or two. Couldn’t have met him before or I’d have remembered.

Only two more to go, I hoped. Bea walked over to pull another woman forward. I got the distinct impression she wasn’t a team player. Oh, boy, what a prize. She had to be older than Bea, all dry skin and shriveled.

“This is Minnie Parker.” 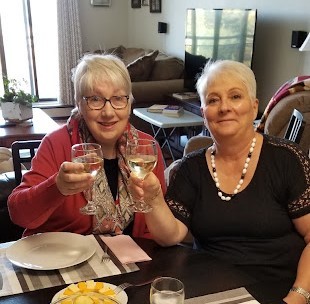 Jamie Tremain was “born” in the summer of 2007. A collaborative effort brought about by two fledgling authors - Liz Lindsay and Pam Blance. Pam and Liz met at their place of work and once a mutual interest in reading (and writing!) was discovered, there was no stopping them! To date Jamie Tremain has published the Dorothy Dennehy Mystery Series and has now released the first book in a new Grant’s Crossing Series – Death on the Alder.

Even before their first book, The Silk Shroud, was published, they had been actively building their brand. One of their fortes was, and still is, interviews on their blog with other authors – and readers. Networking within the supportive writing community continues to be a priority. A recent “Author Survival Network” group was established on Facebook, to offer fellow authors a place to meet, share experiences and offer encouragement to each other.

Jamie Tremain belongs to Crime Writers of Canada, International Thriller Writers, and are proud to be part of the Genre5 Writers group in Guelph, Ontario.

You MUST follow this blog to be eligible to win the giveaway. All other entries will be disqualified if you are not following. Select the Follow button or subscribe by email. Congratulations to last month's winner, Andrew.