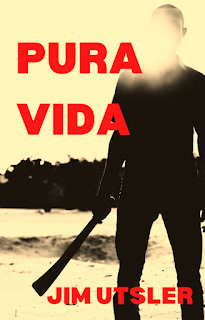 Detroit homicide detective Jacob Miller has been accused of many things, but being smart isn’t one of them. The murder of drug dealer Willy is proof enough, but not covering it up is even worse. So why would he think that stealing a fellow inmate’s hidden fortune is any wiser, especially when an ex-mafia family head is after the same thing?

But even the stupidest people have occasional flashes of brilliance, and Jacob is no exception. After being released from prison and moving to sunny Costa Rica, he solves an international murder mystery involving the usual suspects: love, lust, and murder.

Despite that mildly brainiac feather in his cap, he still has to deal with the beef between him, his fellow inmate, and the mob boss…and the violent fallout that ensues.

He just stood there, staring at me, not so casual now. “So why are you here?” he finally said. “And who’s this?” he added, throwing a thumb over his shoulder toward Bob.

“Because…” I paused. “Bob, would you mind stepping out for a minute?”

Bob shrugged his shoulders. “Whatever.” He closed the door behind himself.

“Look, you and your sister and your friend, you already bled me dry. There’s no more.”

I looked around his room, office, study, and all the expensive baubles here and there. I thought about the trophy car his trophy wife drove, the gate that opened and closed automatically, the everyday maid, the pool and hot tub out back. “Looks like you don’t have it so bad.”

“This, this is all my wife’s. I don’t own a damn thing. Between what you and Patari did, you left me nothing.”

“Oh, c’mon,” I said. “It might be in your wife’s name, but it’s yours. I’m sure you, your accountant and attorney Condon took good care of that.”

I shook my head. “That’s kind of off the table right now.”

“Is it?” He stood a little straighter now, more forcefully. He was going into offensive, CXO mode.

I had to get the advantage back.

“A couple of premature deaths.”