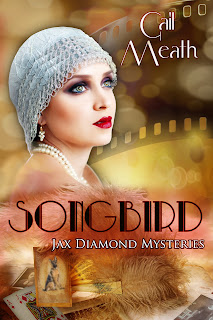 It’s all fun and games, until someone gets killed.

Meet Jax Diamond, a sharp, sophisticated, skilled, no-nonsense private detective. Or is he? Glued to his side is his canine partner, Ace, a fierce and unrelenting German Shepherd whose mere presence terrorizes criminals into submission. Well, maybe not.

But the two of them are a whole lot smarter than they look. And they have their hands full when a playwright’s death is declared natural causes, and his new manuscript worth a million bucks is missing.

Laura Graystone, a beautiful rising Broadway star, is dragged into the heart of their investigation, and she’s none too happy about it. Especially when danger first strikes, and she needs to rely on her own ingenuity to save their hides.

Join Jax, Laura and Ace on a fun yet deadly ride during the Roaring Twenties that takes twists and turns, and a race against time to find the real murderer before he/she/they stop them permanently.

Twenty minutes later, they parked in front of Laura’s apartment building.  Jax turned the car off and leaned back in his seat.  “I’m not convinced it was a heart attack.”

“I knew it,” she whispered under her breath.

“There were a couple of things I found and some things I didn’t find in Sanders’ apartment that night that don’t add up.  I have a friend who is a sergeant on the police force, and I haven’t said anything to him yet.  He’s always accusing me of making a mountain out of a molehill, so I wanted to check things out first in case I’m wrong.  Does that fit in with your quid pro stuff?”

Proudly, she folded her arms in front of her.  “Yes, I believe it does, Detective Diamond.  What did you want to ask me?”

He pulled out his notepad and pencil.  “You said that your meetings with Sam Sanders pertained to your career.  How?”

“He’d written a new musical and...I was hoping he’d choose me for the lead.”

He pointed the pencil at her.  “Aha!  You’re lying again, Miss Graystone.”

“Your pretty hazel eyes moved away from me as you spoke.”

Now they rolled upwards in exasperation.  “Okay, so he chose me for the lead in the play.”

“That’s better.  What was the name of the play?”

“Oh, no, Detective.  You need to give me an answer first.  What did you find at his apartment that you’re not sharing with the police?”

He looked straight ahead now.  “Something in his wastebasket.”

“Such as?  And let me see those baby blues of yours, Detective.”

He laughed.  “Several sheets of paper.  From what I could tell, the title of the play he was writing was Songbird.  That’s your nickname, isn’t it?”

She lowered her head.  “Yes.  Mister Sanders approached me a few weeks ago and mentioned that he’d been working on the play.  He asked me to meet him at L’Aiglon’s to tell me more about it.  The other night, he gave me a copy of the music score to look over.  That’s why I went to his apartment.  It was a great honor having him write a musical for me, especially with his reputation.”

She snapped her head up.  “With me in mind for the lead, I meant to say.”

“Right.  If he gave you a copy, then he still had the original?”

“He was reviewing it when I left his apartment.”

Jax wrote that down.  “Did he get along with everyone at the theater?”

“Hold on.  It’s my turn.  What didn’t you find at the apartment?  You said there were things you found and didn’t find.”

Jax hesitated, then flipped through his notepad.  “He was carrying his dinner with him when he arrived at the apartment, but I couldn’t find any remnants of it.  Was he eating dinner when you got there?”

“I saw a lunchbox on his desk, but he hadn’t started eating yet.”  She closed her eyes and smiled.  “I don’t know what was in that lunchbox, but it smelled just like my mother’s chicken and dumplings with lots of garlic sauce.  She’s a fabulous cook.”

Jax watched her.  “Most mothers are.  Was Sanders close with any of the performers?”

She broke away from her thoughts.  “Honestly, he wasn’t a very friendly sort, which is probably why none of the other employees attended his service.  He was always strictly business with everyone.  But tell me, Detective, why is it so significant that you didn’t find his dinner that night?  I toss the trash down the chute at the end of the hall in my building.”

“His apartment doesn’t have that convenience.  Tenants are expected to empty their trash in the dumpster outside.  And I couldn’t find any sign of his metal lunch pail either.”

“I’m not sure yet.”  He looked at his notepad again.  “How well do you know Robert Ashworth?”

She didn’t like where this was going.  “I think I’m done playing this game, Detective.  Maybe your friend on the police force is right and you’re making a mountain out of a molehill again.  They don’t think any crime has been committed.  Besides, this is none of my business.”

He smiled at her.  “Oh, I think you’re just as curious as I am to know what really happened.”

Award-winning author Gail Meath writes historical romance novels that will whisk you away to another time and place in history where you will meet fascinating characters, both fictional and real, who will capture your heart and soul. Meath loves writing about little or unknown people, places and events in history, rather than relying on the typical stories and settings.

The subgenres of her books vary from action-packed westerns, plot twisting murder mysteries and biographies of powerful women who defied the strict rules of society fighting for the freedom of their countries. Her romances may exclude steamy sexual scenes, yet the intensity between heroine and hero will satisfy your deepest fantasies.