The Fourth of July is coming, and for professional food lover Samantha Barnes, it’s all about the picnic. Okay, and the fireworks. And the parade. But mostly the picnic. What could be better than a DIY clambake followed by the best blueberry buckle in the world? Sam has finally found the perfect recipe in the kitchen of Clara Foster, famed cookbook author and retired restaurateur, and she’s thrilled when Clara agrees to a buckle baking lesson.

But when Clara dies in a house fire blamed on carelessness in the kitchen, Sam doesn’t believe it. Unfortunately, her doubts set in motion an investigation pointing to the new owner of Clara’s legendary restaurant—and a cousin of Sam’s harbormaster boyfriend. So, in between researching the Cape’s best lobster rolls and planning her clambake, Sam needs to find Clara's killer before the fireworks really start....

“Actually,” I said, “there are a couple of other things that I think need explaining. Like why she was cooking bacon at one in the morning.”

I had to agree with her on that. A bacon sandwich is an awesome midnight snack. But I was not going to be deflected by food talk.

“Or how Clara, a professional chef, could have forgotten to turn off a gas burner under a pan of bacon grease,” I continued. “It’s Kitchen Safety 101 and second nature to any chef.”

“She was old,” Peters offered. “Maybe she forgot to turn the burner off.”

The detective looked thoughtful, so I decided to press my point. Thoughtful was a refreshing change from Chief McCauley. “And it really doesn’t explain how that basket of kindling got over to the stove from the fireplace in the corner.”

“I wondered about that myself,” the detective said. “It seemed like the wood should have been kept by the fireplace, but I wasn’t sure.” She paused, then added, “Do you think you could take a look inside, tell me if you see anything else suspicious?”

Peters looked like she wished that particular word hadn’t slipped out. I could almost see her thinking, You don’t say the word suspicious to a journalist. Well, she could stop worrying about that. I’m not a journalist, I wanted to say, I’m just the Cape Cod Foodie.

What I said was, “Suspicious how?”

“Well, more like odd,” she backtracked. “I meant anything out of place.”

The truth was, I really, really didn’t want to go into Clara Foster’s burnt-out shell of a house. I wanted to remember it as it was, light-filled, full of books and art and the aroma of good things baking in the oven. Not charred and blackened, the books and art ash, the stink of smoke overlaying it all. But the truth also was that something was off here, and if I could help find out what exactly had happened last night, then I would offer that help.

“Of course,” I said, “if you don’t think it’ll get cranky cop all mad at me again.” Oops, I thought too late, maybe you don’t want to be making jokes at a time like this, Sam. But I needn’t have worried.

The detective let out a bark of laughter and said, “You let me handle cranky cop.”

And with that, Detective Vivian Peters and her faithful sidekick Samantha Barnes set off to examine the scene of the crime. Assuming there had been a crime, of course. Which I was assuming. Because no matter what the detective said, she had used the word “suspicious” for a reason. 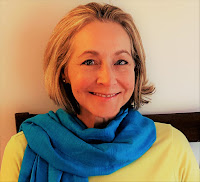 Amy Pershing, who spent every summer of her childhood on Cape Cod, was an editor, a restaurant reviewer and a journalist before leading employee communications at a global bank. A few years ago she waved goodbye to Wall Street to write full time. Murder Is No Picnic is the third of the Cape Cod Foodie mysteries featuring Samantha Barnes, a disgraced but resilient ex-chef who retreats home to Cape Cod where she finds herself juggling a new job as the local paper’s “Cape Cod Foodie,” a complicated love life, a posse of just-slightly-odd friends, a falling-down house, a ginormous dog and a propensity for falling over dead bodies. Elizabeth Gilbert called the first book in the series, A Side of Murder, “the freshest, funniest mystery I have ever read,” and Kirkus Reviews gave the second book, An Eggnog to Die For, a starred review, saying, “A delightful sleuth, a complex mystery, and lovingly described cuisine: a winner for both foodies and mystery mavens.”

Sign up for News from the Cape Cod Foodie!