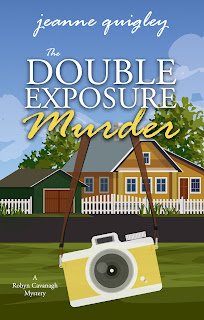 Robyn Cavanagh enjoys a thriving second career as a portrait photographer in her beloved suburban hometown of Garland, New York. Having built a large portfolio of high school senior photos and family portraits, Robyn is thrilled when math teacher Brooke Gibson hires her to take photos of a different subject: 16 Clover Lane, the house Brooke has recently inherited from her late great-aunt. Brooke will soon put the home on the market and wants Robyn to take the photos for the real estate listing. Robyn thinks the cozy house will attract prospective buyers—until she finds bride-to-be Brooke’s battered body in the garden shed.

When Brooke’s mother asks her help in canceling the wedding plans, Robyn plays amateur sleuth and gathers clues while also collecting refunds from Brooke’s wedding vendors. With help from her friend Will Vonderlin, Robyn assembles evidence of a possible love triangle, financial indiscretions, and neighborhood feuds and builds a suspect list that includes Brooke’s fiancé, a jealous relative, a longtime rival, and a shady bartender. The clues lead Robyn to the killer and a spectacular July Fourth finale complete with a marching band and a parade of howling dogs.

Yogi and I arrived at 16 Clover Lane a couple of minutes before 10:30. Brooke’s Ford Focus was parked in the carport.

Brooke didn’t respond to the first ring of the doorbell. I pressed the button again and waited a few seconds. The front door was open several inches, so I called to Brooke through the screen door. When she still didn’t answer, I assumed she was either in the bathroom or the backyard. I opened the screen door and entered the house, Yogi at my heels. The door to the powder room was open, and Brooke wasn’t in any of the first-floor rooms.

“Brooke! It’s Robyn.” I yelled up the staircase opposite the front door. I listened for a few seconds then headed into the kitchen. “Let’s go out back.”

The mystery deepened when I didn’t find Brooke on the patio. More possibilities ran through my mind. Brooke could be on a stroll around the block or in a neighbor’s house for a quick visit.

I called Brooke’s cell; when it went to voice mail, I ended the call without leaving a message. I’d text her, but before I started the message, a breeze blew open the shed door. The creaky door closed with a soft thud; then, another puff of wind urged it open again.

I spotted a can of paint on the ground outside the shed. “I should’ve known Brooke would fix the shed.”

Curious about the paint color Brooke had selected, I crossed the yard and bent over the paint can. I thought Brooke might have selected sunny yellow to match the house, but she had purchased a dark green shade. New paintbrushes and a drip pan lay on the grass next to the can. Did she plan to enlist me to help with the shed’s facelift?

The shed’s door creaked open and closed a third time. I moved to secure the door shut, but first I peeked inside and experienced an adrenaline rush like I’d never had. Fighting a growing sense of panic, I wrapped a length of the leash around my hand and pulled Yogi away from the supine form on the shed’s floor.

I took a second look at the still figure, clad in cut-off jeans and a white tank top. “Brooke!” Brooke’s mouth was open, and her eyes stared at the roof. Her nose was bloodied, and scratch marks stretched from her shoulders to her wrists. Her collarbone jutted out at a sickening angle.

I pushed back the door and told Yogi to lie down, making him a makeshift doorstop. He obeyed and watched me check Brooke for a pulse and breath.

It was a futile attempt, I knew, but a necessary one.

I stepped into the doorway and called 9-1-1, my glance fixed on the steel-blade shovel on the ground next to Brooke’s body.

Jeanne Quigley is the author of the Veronica Walsh Mysteries and the Robyn Cavanagh mystery series. Unlike her fictional sleuths, she has never been a soap opera star or an accountant (though she was an accounting major for a few minutes in the spring of 1985), but she has worked for an educational publisher and in the music industry. A lifelong New Yorker, Jeanne lives in her native Rockland County.