A Scaly Tail of Murder by Jacqueline Vick 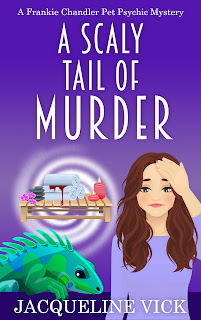 A new fiancé, an old boyfriend, and a murder that will change everything.

Frankie Chandler is finally at peace with her life. She’s engaged to Detective Martin Bowers, her pet psychic business is booming, and she’s overcome the emotional residue of a past relationship that destroyed her self-respect.

Just when everything’s going swell, trouble strolls through her front door. Jeffrey Ross, the ex-boyfriend who betrayed her, needs Frankie’s help. To get rid of him, she agrees to retrieve the keys he left with yet another hostile ex-girlfriend, a masseuse. Unfortunately, when Frankie shows up early at Friendly Fingers Spa, Jeff’s latest fling is face down in the new Jacuzzi. Murdered right in front of her Fiji Crested iguana.

The reptile refuses to tell what he knows, and when Frankie’s involuntary entanglement in the investigation threatens to ruin Bowers’ chances for promotion, she takes steps. After calling an uneasy truce with Jeff, the two form a crime-solving team that will either solve the mystery or bring an end to everything she’s worked for.

“Chauncey,” I muttered, pushing his snout away from my face. He made a shushing noise, which was an odd sound to come from a dog. I wrinkled my nose. He had rolled in something musky. Funny, but it was pleasant, unlike the usual smells my dog brought into the house. My brow wrinkled as my logical mind fought through the haze. How did he get outside? Or inside? My ginger mutt no longer lived here. “Chauncey?”

My eyes flew open. Instead of my pup wanting to play, Jeffrey Ross, my ex-boyfriend from Loon Lake, Wisconsin, leaned over me as he unbuttoned my blouse.

Shocked into motion, I slapped at his hands.

Unfazed, he tugged at the third button from the top. “You need air.”

In response, Jeff flew up and backwards, a look of surprise on his handsome features. Mid-air, his body twisted and slammed to the floor, face down. Bowers pressed one knee into my ex’s back as he reached for his cuffs. I scrambled off the couch and stared in disbelief as a tsunami of anger slammed into me.

My worst nightmare had just walked into my home. I felt violated. This was the scumbag who had cheated on me. This was the oaf who had forced me to flee Loon Lake after he’d shared my secrets with a buxom reporter, telling her how I’d faked my psychic appointments. Back then I’d had to fake them because I hadn’t yet discovered my ability. The scandal made the front page.

I blame what happened next on shock.

With Bowers balanced on one knee, I easily shoved him aside with a two-handed body slam, toppling him.

Before he could recover, I straddled Jeff’s back and pummeled his solid shoulders with my fists. “How dare you?” I shrieked. “How dare you come into my home? How dare you show yourself to me?”

My verbal assault lacked creativity, but I continued in that vein.

Two muscular arms clamped around me and lifted me to my feet.

“No fair hitting the cuffed man.”

Keeping my arms pinned to my sides, Bowers carried me to the couch and dumped me there. He pointed a finger at me.

He returned to Jeff and yanked him to his feet. My ex winced.

Spotting a stray catnip mouse under the coffee table, I picked it up and winged it at Jeff’s head, earning me a stern glance from my fiancé.

When Bowers leaned in to take a closer look at my ex, Jeff raised his chin and held a pose. I’d call it Honest Man Faced with Adversity. He looked the same. Square jaw. Roman nose. A few more lines around his eyes, the light creases contrasting with his tanned skin. Plenty of muscles without reaching football player status.

Bowers sent his gaze back to me. “You know this man?”

Years of good-girl training kicked in, and as I stood, my tone morphed into polite sweetness. “Martin Bowers, this is Jeffrey Ross. Jeffrey, this is Martin, my fiancé.”

Bowers raised one brow. “This is Jeff?”

The accused grinned at him. “You’ve heard of me?”

My fiancé, the detective, shook his head in wonder. “Do you want to press charges?”

Jeff snorted. “For what? You dropped like a rock. I made you comfortable and was giving you some air.” He looked to Bowers for approval. “That’s what you do, right?”

“It is.” Bowers crossed over to me and angled my body. He now had both of us in view. Resting his hands on my shoulders, he peered into my eyes with concern. “Are you alright?”

Still panting, I wiped my hand over my face because I was pretty sure there was spittle around my mouth. “Fine. I was just…surprised.”

Bowers jerked his head toward the grinning man in my living room. “Because he showed up, I assume.”

I blew out a breath, willing myself not to hyperventilate. “Yep.”

Bowers turned to him. We might have rehearsed it as we said in unison, “What do you want?”

Jacqueline Vick spent her childhood plotting ways to murder her Barbie doll. Writing provided a more productive outlet. She is the author of over twenty humorous novels and short stories. Her mystery series characters include Frankie Chandler, Pet Psychic and the Harlow Brothers. Her books are known for satirical humor and engaging characters who are desperate to keep their secrets. She currently resides in Southern California with her husband.

Paperback copy of A Scaly Tail of Murder