An Embarrassment of Itches by M.K. Dean 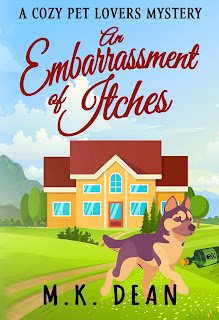 As a house-call vet, Ginny Reese has seen her share of the weird and wacky. But nothing in her previous experience could have prepared her to find one of her clients floating in her own swimming pool.

Local artist Amanda Kelly was extremely wealthy with her share of secrets. By naming Ginny as her heir, not only did she make Ginny the number one suspect, but she painted a big bull’s eye on her friend’s back as well.

With her trusty German Shepherd at her side, it’s up to Ginny to find the real killer and prove her innocence to the sheriff. The new sheriff. Who happens to be her ex.

Headlights in my rearview mirror reminded me to move along and not block traffic.

I’d already sped up, but scarcely between one breath and the next, the headlights lit up my rear window. As they approached, they suddenly switched to high beam.

Oh. One of those jerks.

The winding road was too narrow for me to pull over and allow the car behind me to pass. The blinding light filled my car, causing me to squint as my concentration bounced from the car behind to the road ahead. Whoever it was behind me was just going to have to wait. I wasn't driving that slowly, for heaven's sakes.

The roar of a sudden acceleration made me look up in alarm. The headlights loomed even closer than before. My hands tightened on the wheel as I pressed on the gas. I'd been driving these back roads since I was a teenager. I knew every curve like the back of my hand. Shifting gears like a Formula One driver, I saw the needle on the speedometer climb to forty-five, then to fifty. That may not sound fast if you're used to interstate driving, but when you’re looping turns on a mountain road at night at that speed, it’s like riding a roller coaster.

The headlights behind me fell back, and I eased up on the gas when I took a corner tight enough that the car swayed as though it might roll over. Remy sat up and thrust his nose between the seats.

“Not now, Remy. Lie down.” I snapped out my order with no thought of reassuring him. When I cornered another turn too sharply, his shoulder slammed into my driver's seat, and he withdrew.

The road opened up into an open straightaway, and I slowed down. There still wasn't any good place to pull over, but if this idiot wanted to pass me, now was his chance. The view ahead was unobstructed, and there were no headlights coming from the opposite direction. As expected, when I decelerated, the car behind me sped up. Its headlights filled the interior of my car again as the car behind me loomed ever closer.

The hair on the back of my neck rose when I realized the driver had no intention of passing.

You can always tell. The aggressive, impatient drivers in their pickup trucks will roar into the opposite lane well before they reach your car to pass you on one of these back roads. Too late, I realized the car racing toward me had something different in mind.

The engine screamed as I stomped on the gas and delayed shifting gears as long as possible to allow my car to shoot forward. But the Subaru isn't built for racing, and mine was loaded down with equipment. The car behind me had the prior advantage of traveling at speed, and I braced for impact as it bore down on me.

The thump of contact with my rear bumper was hard enough to snap my head back, but I retained control of the wheel. We were rapidly running out of straight road, and while I couldn’t maintain this kind of speed on the curves, I thought I might be the better driver there. My phone was still in my back pocket instead of sitting in the hands-free bracket where it was supposed to be, so I couldn’t even call for help. I was on this ride to the end, whatever that end might be.

I drove even faster.

A pair of green-gold glows by the side of the road caught my eye, but instead of braking as I’d normally have done, I laid on the horn and mashed the gas pedal to the floor. As soon as I’d passed them, I slowed and flipped up the rearview mirror.

Silhouetted in the glare of the headlights behind me were the forms of several deer leaping across the road. My pursuer slowed at the sight of deer crossing ahead of him, but sped up as soon as the deer were on the other side of the road.

But I knew something the other driver didn’t or had forgotten in his eagerness to run me off the road.

There’s always one more deer than you think there is.

The final deer, lagging behind the herd, stepped out in the middle of the road. Blinded by the oncoming headlights, it froze, staring in the direction of the car bearing down on it. 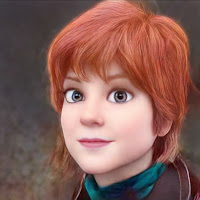 M.K. Dean is the new pen name of award-winning author McKenna Dean, as she dives into the world of cozy mysteries. She lives on a small farm in North Carolina with her family, as well as the assorted dogs, cats, and various livestock.

She likes putting her characters in hot water to see how strong they are. Like tea bags, only sexier.

You MUST follow this blog to be eligible to win the giveaway. All other entries will be disqualified if you are not following. Select the Follow button or subscribe by email. Congratulations to last month's winner, Andrew.