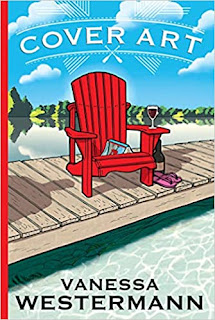 Charley Scott is thrilled to be running a summer pop-up gallery in cottage country. Returning to the lakeside village, not on vacation but as an artist, she’s determined to turn her hobby into a career.

But, beneath the surface of this peaceful town, darkness lurks. There’s a history.

Local chocolatier, Matt Thorn, is struggling with his father’s death and his legacy of deception. As Matt plans to expose his father’s secrets, a local is found dead, the result of eating Matt’s chocolates.

Luckily, art is all about perspective and Charley’s always had a keen eye. Can she see past the obvious and find the killer? 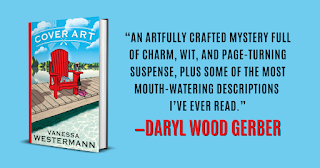 Charley stepped out onto the stone patio, but behind her she felt the space open up, widen. She glanced back.

Kayla hesitated on the threshold. One frozen beat. Then she seemed to jerk into motion, to force herself forward.

They clustered on the patio, in the line of the wind. The lawn sloped down and away, toward the water. From that elevated position, even in the dusk, the view was stunning. The lake shimmered sunset red. The sky inverted, clouds and spruce and all. The reflection like a lithograph on stone, freshly inked.

Andrew’s house looked out onto the bay. The perspective here was different than theirs, the property more secluded. Private. A shield of evergreens blocked the view to the neighbours, the shoreline between the waterfronts thick with cattails and bulrush.

Unless someone was out on the lake, there would be no witnesses. No one to help.

“When did Andrew come outside?” Meghan asked.

“Right after dinner,” Kayla said. “We ate late. I’m not sure what time it was.”

The tag-team questions kept up a steady stream of conversation. A distraction to ease the pain and, in this case, Charley knew, a tool. To gather information.

Alex pulled out his phone. A bright beam of light hit the ground. He’d switched on the flashlight app. For some reason, that single action sent a shiver down her spine. A loon cried, an eerie, haunting sound that carried across the water.

Meghan turned to Kayla. “You don’t need to go through this again. Charley can wait inside with you.”

Alex nodded. “We can take it from here.”

He caught her eye and she got the message. The offer wasn’t an act of kindness. It was a trap.

But Kayla set her jaw, a stubborn tilt to her chin. “I can handle it.” As though to prove it, she led the way.

Grass rustled beneath the soles of their shoes. Someone’s breath rasped, faster, louder than it should have in that ominous silence as Kayla led them to her husband’s body.

In the shadow of the trees, it was darker still. Insects hummed around them, on the hunt for blood.

The beam of light caught the back of a red Adirondack chair. One solitary chair, positioned on its own. Light flooded over the curved yoke, crisscrossed through the wooden planks.

The chair was empty.

The light moved on, sweeping through the air, then down over indistinct shapes, the rocks by the water.

“There.” Kayla broke the silence. “Grandmother would say, he’s gone to live with the People of the Day.” In the sky, where spirits laughed and sang and played. His soul purified by a quick, violent death.

A motionless figure lay on the ground.

When the light hit the man’s face, Charley sucked in a breath. The swollen mouth and throat, the welts on the skin—

“His worst nightmare come true,” Kayla said in a calm, almost detached voice. “Not being able to breathe and out here alone.”

There was little doubt what had caused Andrew’s death. 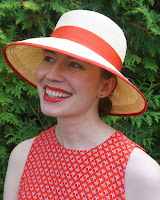 An avid reader of mysteries, Vanessa Westermann is a former Arthur Ellis Awards judge, holds an M.A. in English Literature, as well as a Bachelor of Education, and has taught creative writing. Her debut mystery, An Excuse for Murder, was published in 2019. At the heart of all of Westermann’s stories are strong female protagonists inspired by the heroines in her own life. She currently lives in Ontario.