Gone Before by Terry Korth Fischer 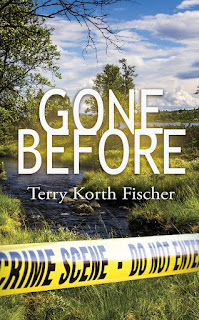 Small-town detective, Rory Naysmith, thought he’d seen it all, but a young woman’s brutal murder is especially hard to stomach. Doubly so, when he recognizes the murder’s MO is identical to that of Tobias Snearl—the killer he put behind bars a decade before. His frustration grows after a series of senseless accidents plague those dearest to him, and a second woman dies—this one too close to home. Searching for answers, Rory races against time, plunging deep into the murder investigations, drawing ever closer to becoming a casualty of the dark, angry deeds himself, until he finds no one is who they pretend to be—and none are beyond evil’s reach.

In the distance, the railroad bridge stretched from Nebraska over the Missouri River and touched the Iowa shore. Someone had mounded boulders farther down. Perhaps they’d been removed from the grounds and left there for a retaining wall. More likely, they were hidden from view, too heavy to move elsewhere. They were an eyesore, starting at the tree line, topping three feet, and spreading down to the water’s edge. Rory scrambled up the stack, intent on gaining the elevated advantage, the moss-covered boulders felt slippery under the smooth leather soles of his shoes.

When he reached the top, he caught a whiff of cigarette smoke—or was it marijuana?

He pivoted quickly and lost purchase. To break the fall, he instinctively put out his hands, and his foot slid into a crevice between two large stones. His forearms smashed against the hard surface. The force of his body slam moved the boulders which then interlocked around his foot.

From behind, he heard someone run off through the trees. He cursed, pushed up, ignored the complaints from his knees, and hand-walked his upper body back to his feet. With one foot captive, and kneeling over the other, he awkwardly righted himself. Then gave a tug. The vise-grip held tight. His palms felt razor-scraped. He reached for the phone, but it wasn’t there.

It took a moment to spot his lifeline, five feet away and out of reach.

Terry Korth Fischer writes mystery and memoir. Her memoir, Omaha to Ogallala, was released in 2019. Her short stories have appeared in numerous anthologies in print and online. Terry is a member of Sisters in Crime, Pennwriters, Inc, and Clear Lake Area Writers. Transplanted from the Midwest, Terry lives in Houston with her husband and their two guard cats. She enjoys a good mystery, heat and humidity, and long summer days. Visit her website at https://terrykorthfischer.com