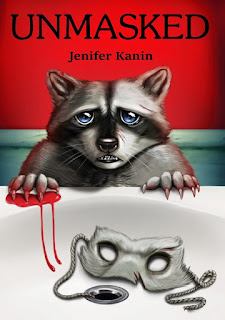 A mystery novel told from the perspective of a raccoon.

At the urging of his friend Jenny, Gary discovers he has the ability to impersonate other wild and domestic animals. At first, the goal is to access the wealth of resources inside the houses of the people living near their forest homes. But when some of the animals are found dead, the pair uses their newfound skills to help uncover who or what is behind the murders. Can Gary overcome his past to be the hero everyone needs?

Jenny noted to herself that the next time they needed to meet, they should not pick such a creepy location. Broken and rusted farm equipment with protruding, jagged pieces had sunk into the soft soil, and now appeared to be emerging from the ground all around her. Jenny thought to herself that the bent and twisted metal looked like the mighty claws of some long-dead beast, left to rot among the overgrown grass and weeds. The exaggerated shadows they cast in the fading light seemed like fingers reaching out from the impending darkness, intent on grasping anyone they could touch, to pull them down with them into the bowels of the earth.

The shadows grew longer and longer until they finally swallowed up what was left of the twilight, enveloping the area in darkness. The wind was picking up and the rumblings of the coming storm could be heard off in the distance. Jenny’s nose twitched as she smelled the breeze, and she knew the rain was not far off. She wove her way among the twisted remains of the great metal machines until she found a location where she felt safe to observe anyone who might be coming from the direction of the Williams’ place.

She tucked herself behind the front wheel of an old, abandoned tractor and hunkered down, regretting they had not chosen her comfy home as their rendezvous point. From time to time the wind would whip up and she could feel a chill as it ruffled the fur on her back. A shiver spread through her body and she was unsure if it was from the wind or the unnerving feeling she was getting from the eerie, metallic graveyard. Occasionally a gust would be strong enough that even parts of the tractor would shake a little, and the erratic clattering of metal on metal was doing little to settle her nerves.

As Jenny continued to wait behind the tractor wheel, it was getting more and more difficult to see anyone who might be approaching. She would catch movement out of the corner of her eye and thinking it might be Gary would get ready to spring from her hiding place to greet him, only to be disappointed. It would just be the swaying of the grass or something else being blown around by the approaching tempest. Her eyes were growing weary squinting into the distance when she noticed a figure finally approaching in the dark. Not wanting to get her hopes up again, she stayed huddled down until she could get a better look at who or what it was. As she anxiously waited, she could see what looked like the silhouette of a raccoon emerging from the tall grasses. Surely that is Gary. He looks a little bigger than normal but that must just be the disguise. When Jenny was convinced, she bounded out from her hiding place and called out to her friend, her voice piercing the night air.

Upon hearing Jenny’s voice, the figure altered its course and headed directly for her. Excited to tell him everything she had learned about the boxes and how they worked, Jenny’s thoughts were focused on the day’s events and not on the approaching figure’s identity. Only after it was too late did she realize she had made a terrible mistake.

Jenifer Kanin is a Canadian writer living in the Niagara region of Ontario, Canada. Nestled half way between the world famous falls, and the metropolitan city of Toronto, her writing is drawn from her experiences on her family farm.