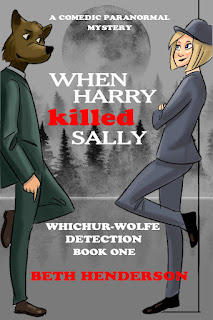 WHEN HARRY KILLED SALLY, the cops got it wrong!

Emmalyst Whichur knew there was no way Harry had killed her godmother. Harry adored Sally. But the evidence pointed right at him. As an investigative reporter, though freshly out of a job, Lyst had not only the chops to look into things, she had the time. In any case, she needed to be in Killaman Falls. Even though it was nearly the last place on Earth she would have chosen to be. And not just because killers were apparently loose in the miniscule mountain town.

Connor Wolfe knew his friend Harry hadn’t killed Sally Whichur either, but there was that damning evidence. As the official non-paid liaison for the sheriff’s department in Killaman Falls, New Hampshire, at least he had an “in” with law enforcement. But he had further problems to deal with, one of them being springing Harry before the Full Moon arrived. If he was still incarcerated then, a well-kept secret the two of them shared would be out in the open.

Sally had been an expert secret keeper herself though. Connor knew nothing of Sally’s life prior to arriving in Killaman Falls, and Lyst knew nothing about it prior to Sally’s arrival at the commune where Lyst had been born. Could Sally’s mysterious past have caught up with her? Or was the answer to her murder closer to home?

When Emmalyst Whichur met Connor Wolfe, it was a sleuthing match in the making. And possibly a bit more.

After all, in Killaman Falls, if a witch and a werewolf walk into the same bar, things really can't be the same ever again.

Emmalyst Whichur had obviously ordered her food because the menu was missing, and a steaming mug of coffee sat near her right hand. Her hair swung just above her shoulders and when she looked up passed the brim of her hat when I stopped by the banquette seat across from her, there was a challenge in her green eyes.

“We can forego the FMP groping,” she said.

Have to admit, it was not what I’d expected her opening broadside to be.

“You’re familiar with the Full Moon Protection festival then?”

She sighed. “Harry used to do it. Are you picking the practice up while he’s incarcerated to exercise your lecherous tendencies?”

“Actually, he handed the sacred duty over to me two years ago. We had a ceremony, and everything thing. People cheered,” I added.

“People cheered.” She said it flat and doubting.

I held my hand out, offering her one of my business cards. “Connor Wolfe. I believe I’ve got something that you need.”

“Don’t count on it, buddy,” she snarled, ignoring the card, so I dropped it on the table.

Having supplied my most charming grin—at least, that’s what my mother had called it. I’d had well over a hundred and fifty years of it proving its worth, too—I dangled a keyring before her eyes. “You probably need these to get into Sally’s place.”

“Oh. Yes, thank you. I do need those,” she agreed accepting the offering. “Sorry I misread your intentions.”

“And the reason that you should?”

“And how exactly are you involved in this?” she demanded. “Other than having been cheered when you inherited the FMP duties, which I take it means you two are friends.”

“Brothers beneath the skin is how Harry terms it. Do I get to sit down or just continue to loom over you?”

She sounded sarcastic as hell.

“Make it Connor,” I said. “We’ll be working closely on this case. Much better to be on friendly terms. What would you prefer I call you? Ms. Whichur or Emmalyst?”

She gritted her teeth. I detected a slight shutter of revulsion. “Just Lyst, Connor. I know everyone’s on a first name basis on the mountain. Probably because they’re all related.”

“You really know nothing about Killaman Falls, do you?”

“Hick town on the side of a mountain and nowhere near civilization. Or do you finally have cell service here?”

“Only if you own a dish and it and the satellite are in a committed relationship,” I admitted.

“So, communication off the mountain is still via ham radio or did the phone company run cables to make landlines the up-and-coming thing here?”

“Yes, they did, on poles. Then a tree fell over and wiped service out. As they haven’t made it back to repair things, it’s still on our wish list. A few people do know how to send smoke signals.”

“Ah,” she said. “You’re being factious. What exactly do you do on the mountain beyond the Full Moon hogwash, Connor Wolfe? Forest ranger? Lumberjack?”

“Closer to local gigolo, although the clientele is very select.” And, yes, I was being factious.

Which was the point when Omay, the tavern owner’s wife, set a bottle of Guiness in front of me and cocked her head. “The usual Friday night fare, sheriff?”

“No imagination, have I?” I said. “I’ll abandon caution tonight and have what Ms. Whichur is having. What is it?”

“Your usual,” Omay answered and returned to the kitchen.

I met Sally’s niece’s eyes across the table. “We have something in common already. Huzzah!”

“Dial it down, buddy,” Emmalyst ordered. “Since Mrs. Whatever called you ‘sheriff’ it sounds like the population has reached the desired number to acquire their own cop in Killaman Falls.”

“Devil a bit, darlin’. It’s an honorary title. For some reason they felt the Falls needed one on the scene.”

“Perhaps the reason they thought one was needed was that the name of this widening in the road is Kill-a-man,” she said.

“It’s likely a tumble over the Falls is what killed the lad. Besides, no one knows how far back in time that supposedly took place.”

Emmalyst shrugged. “I’ve certainly never heard. Perhaps the question should be why hasn’t the name been changed to something less…er…fatal?”

“No, the question is why did Sally Whichur choose to move here twenty years ago?” 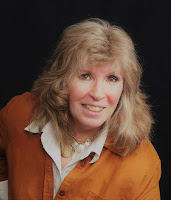 Beth Henderson has always loved mystery and currently she writes quite a lot of it, just under various names. Connor Wolfe isn’t the only one answering to more than one name.

Henderson’s first published novel was a romantic suspense comedy, released in May 1990. Since then she’s worn a variety of names and has over 30 novels, 9 novellas, 16 short stories, and the numbers keep growing. She also writes non-fiction about writing genre fiction. There are very few genres she hasn’t taken a fancy to when it comes to spinning tales. WHEN HARRY KILLED SALLY is the 1st book in the Whichur-Wolfe Detection paranormal lite cozy mystery romantic comedy series.